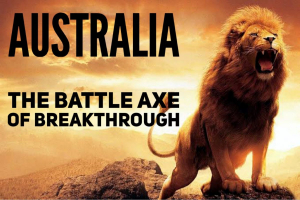 Anita Alexander
WORD OVER AUSTRALIA: 2/05/2022
Anita Alexander
The Mute Button, The Roar of the Lion, The River of Fire, A New Birth of an Apostolic People, and Australia the Battle Axe of God.
THE MUTE BUTTON ON THE SUPERFICIAL AND THE RELEASE OF THE ROAR
There is a shift taking place in this hour of the voice of influence that has been heard in the land over my people. For I am silencing the voice of man, and I am taking off the lid of limitation that the voice of man’s influence has had on my church in Australia. I saw the Lord press the mute button on ones who had influence in this nation that have kept His people in the shallow waters of compromise, superficiality, performance based traditions of men that make the power of God to no effect.
For the Lord says as I am raising the prophetic voice in this land and as the tide is rising , MY VOICE shall be heard in this land. The Word of the Lord will not be scarce but as MY VOICE is beginning to be heard it will saturate the dry soil and usher in the rains of my spirit. There is a new release of My prophetic voice in the heavens over this nation, from mouthpieces who are young and old, insignificant and significant, seen and unseen, from prominent stages and from closets of obscurity. This VOICE of GOD that is filling the mouths of the prophets in this hour is causing the heavens to be heavily pregnant with promise. And as the word of the lord saturates the heavens over this great nation of the Southland of the Holy Spirit, the heavens will declare the Glory of God and all flesh will stand and see it.
It’s a voice that cannot be harnessed nor quieted because this voice thunders from the very throne of God. It is HIS VOICE that brings forth the lightnings and thunders of heaven that call forth the rain of His Spirit to flood. And this flood will be a mighty rushing river of God’s Holy Fire that cannot be quenched nor put out by the voice of another. As the voice and influence of man is being silenced in this hour over my church in Australia , and as the lid of limitation is being removed, My VOICE is going to resound and My VOICE shall be heard and it shall be the VOICE OF THE LION.
THE BIRTHING OF AN APOSTOLIC PEOPLE
My voice is going to begin to roar over the land as there are new apostolic ministries that are being birthed and coming forth. They are coming forth even now says God, springing up out of the land from which they have sown themselves. For a seed cannot come to fruition unless it dies and falls in the ground. And there have been many that I have caused to sow THEMSELVES into the Land. A people who have forsaken all for the cause and destiny of a nation.
But now is the harvest of that which has been sown in secret I am going to reward in the open. Many shall say “where have they come from?” , and the Lord says, they have come from the dark place of the earth, they have sown their lives into the Land, for the cause and the assignment of the land, hidden, ready to be revealed to carry the roar. And NOW they come forth carrying the frequency of the Voice of the Lion of the tribe of Judah who has overcome. And as they have sown themselves into the Land, they now carry the authority for the assignment of the land. And the ancient strongholds and pillars of resistance are going to come down and fade away at the sound of the roar. And this roar that each have will be ONE VOICE, it will be many voices that have ONE FREQUENCY and one vibration. It is a VOICE OF THE KINGDOM and as they roar they will call forth destiny over a nation who has yet to rise to her full potential.
THE DESTINY AND BLUEPRINT OF THE BATTLE AXE.
Now says God, as the full voice of the Apostolic is heard over the land saturating every part with the sound of the blueprint of heaven over this great Nation of Australia, you Australia will now rise to your full potential. You Australia will now come into destiny, you Australia will no more be lidded by superficial customs of man-made religion. No Australia! You will be one who takes her place as a justice carrier to the nations. You Australia will no more be stunted, you will be called wild and free and bring many into their destiny. I have called you as a battle axe, an instrument of war in my hand, that will bring breakthrough and bring deliverance from demonic oppression, and possession.